I saw this movie halfway through reading the book. Which I suppose is appropriate, since the interlocking stories in the novel all get interrupted except the one in the middle. The novel is constructed to be a Russian doll that splits open to reveal another doll inside, recursively.  The stories are the dolls, and the author lets his audience in on his tricks through meta-comments in the stories.  The main character of one story finds a copy of the preceding story torn in half, for example, then says to his pen pal how frustrating it is to lose a story halfway through -- he compares it to an interrupted love affair.  The style of the novel is jarring -- just as the reader starts getting used to the 19th Century reconstructed journal's style in the first story, it stops mid-sentence.  (I also read this book on a Kindle, so it wasn't as easy to flip to the end or skip the boring parts.)  The language is frequently stilted, purposely so, and aims at high art. The stories also jump forward in time with each interruption, so the author takes us to two futuristic settings, two contemporary settings, and two in the past.  These stories have great plots with many twists and turns, and though I did get lost a little in the theological discussion of the 19th Century story, which also centers on the Pacific slave trade, I found that I wanted to know how all the stories would turn out in the end.  The stories in the novel are sadder and stranger than in the movie, as they almost always are.  I enjoyed them, even though I knew, or thought I did, how they would end.  Having seen the movie in that sense helped sustain me through the jolts described previously.  However, it was hard not to put the movie version back into the novel in my head once I had seen it, so in that sense the movie was a hindrance.  I would have loved the book more if I had read it all the way through first. 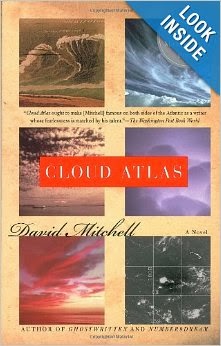